The European Heritage Volunteers Network and its partners throughout Europe express their stern condemnation about the violent and irrational aggression caused by the Russian state against Ukraine.


The European Heritage Volunteers Network and its partners stand in absolute solidarity with the population and the civil society in Ukraine, especially with our partners and friends in the country, who are currently enduring the unbearable onslaught of a senseless war that has befell upon their sovereign nation. We include in our solidarity our friends and the civil society activists in Russia, who are bravely opposing the vicious actions taken by their government against European peace.


The Preamble to the Constitution of UNESCO declares that “since wars begin in the minds of men, it is in the minds of men that the defenses of peace must be constructed.” Echoing this affirmation, the European Heritage Volunteers Network and its partners have worked determinedly for three decades to create spaces for international exchange and intercultural cooperation, where peace can be built on the basis of shared European values, dialogue and solidarity. This network of committed partner institutions, organisations and initiatives, heritage professionals, heritage enthusiasts and civil society activists from the wide European cultural space has embraced in their activities the principles of pan-European cooperation, and firmly stands for the belief that the shared history and culture of Europe should be understood as a unifying bond that transcends the shallow differences that may seem to set them apart.


Ukraine has been historically a melting pot of cultures and a corridor for countless ideas, influences and exchanges which is reflected in its wealthy cultural heritage at the heart of Europe. Its history has been closely intertwined with that of its neighbours, and this undeniable connection serves as proof of the permeability of cultural borders between European nations and countries. Europe’s diverse and multilayered history and Ukraine’s and Russia’s remarkable places within Europe’s history make today a loud and inescapable call for peace between them as well as beyond the region.


Modern Europe is an amalgamation of communities that have chosen the path of peace after tumultuous times of conflicts that saw two world wars in the span of a single generation. This traumatic birth of the current, modern, peace-based Europe is the reason behind a collective impulse towards solidarity, unity and freedom that form the core of European values. For this reason, the European Heritage Volunteers Network and its partners join together with many voices around Europe and the globe urging for a prompt resolution to this absurd aggression and violence.


European Heritage Volunteers and its partners want to remind on the occasion of the current war also other armed conflicts in Europe and beyond which caused countless victims among the civil society and dramatic loss of cultural heritage.


The European Heritage Volunteers Network and its partners will continue to work together to promote avenues for peaceful exchange and trans-border connections built upon the colorful and rich diversity that permeates European tangible and intangible cultural heritage. We hope that this effort continues to sow the seed of pan-European cooperation and can assist in the construction of a stronger sense and understanding of the diverse, but common historical identity of all Europeans. 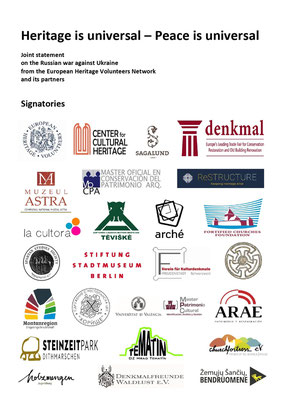 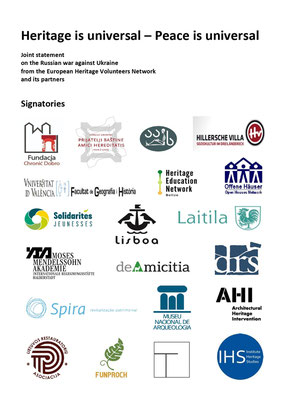